If you already worked a bit with Docker, maybe did you end-up in a situation were you needed to launch/create/manage a new container from an already existing one. For example, when you are running a dockerized Jenkins instance and need to create ephemeral containers in your pipeline to perform build tasks.

In such case, a quick Google search will offers you two main options :

In my case, I’m running my containers on a small dedicated server using Docker compose. Mainly to perform per commit build jobs on a couple of open-source projects I follow. So DinD doesn’t seems like a good option.

This left us with the DooD approach. However, as a former “offensive security” guy, I can’t accept to break the isolation between my containers and my host so easily. Indeed, as stated by the Docker documentation : “Docker’s out-of-the-box authorization model is all or nothing. Any user with permission to access the Docker daemon can run any Docker client command. The same is true for callers using Docker’s Engine API to contact the daemon.”

Which mean that in case of compromising of a container with access to the Docker socket, getting root access on the host can be easily achieved. All an attacker would have to do is to download the standalone docker client, launch a new busybox container mounting the root of the host to a directory, and then chroot into it :

Note : This is the exact same reason why being in the docker group is considered equal having root privilege. It works from the host too :

Regarding the first point, it’s a great feature. However, if a container with access to the Docker socket is compromised, the attacker will also most likely have access to the client certificate. In such case, the scenario presented previously is still relevant.

Regarding the second point, no official authorization plugin is provided. Multiple implementation exist, more or less functional and more or less maintained. I’m not a big fan of Docker plugins, since they are a bit anti-idiomatic with the “Build Once, Deploy Anywhere” philosophy.

When I saw that the Docker socket give access to a Web API, my first though was “reverse-proxy”. If you are not familiar with this concept, a reverse-proxy stand between a web server and its clients and forward their requests to it. A reverse-proxy also allows to perform different tasks such as caching, load-balancing and… requests filtering ! To solve our issue, we can mount our Docker socket into a revers-proxy container, configure our Docker client to work with a remote socket and filter its HTTP requests to the API to only allow what we want. 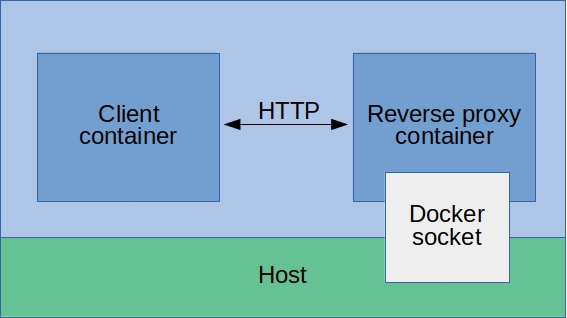 One of the most commonly used reverse proxy is Nginx, which happens to have a ready to use official image on Dockerhub. Neat right ? No.

By doing so, we basically move our risk of compromising from the Jenkins container to the Nginx one. The attack surface is reduced (since Jenkins is not really the most secure software ever), but we still end-up with a full-sized Docker container, either based on alpine or debian, running a service with much more features than actually needed.

In some (most ?) cases it may seems like an acceptable solution, but let’s get paranoid and see how we can do it better.

Scratch images and Golang to the rescue

A neat way to have an as empty as possible Docker image is to build it “FROM scratch”, which basically means that your image will “only” contains what you put in it. No sh, no /bin, no /lib, no thing. The first question that should come up to your mind is : What about dependencies ?

Luckily, Golang is a language offering just the level of abstraction we need to code a reverse-proxy painlessly while offering all the capabilities of a compiled language, including static compilation.

Static compilation is a compilation process resulting in a standalone binary embedding all its dependencies. For instance, a software developed in C and statically compiled won’t rely on the system libc but the one it as been compiled with. The same thing can easily be achieved in Go :

With this information in mind, all we now have to do is apply the classic “make it work, then make it better” method :

Each of those points will be the subject of dedicated blog posts in this series.

If you are looking for a production ready solution and are not really interested by the DIY part, you may want to have a look at :